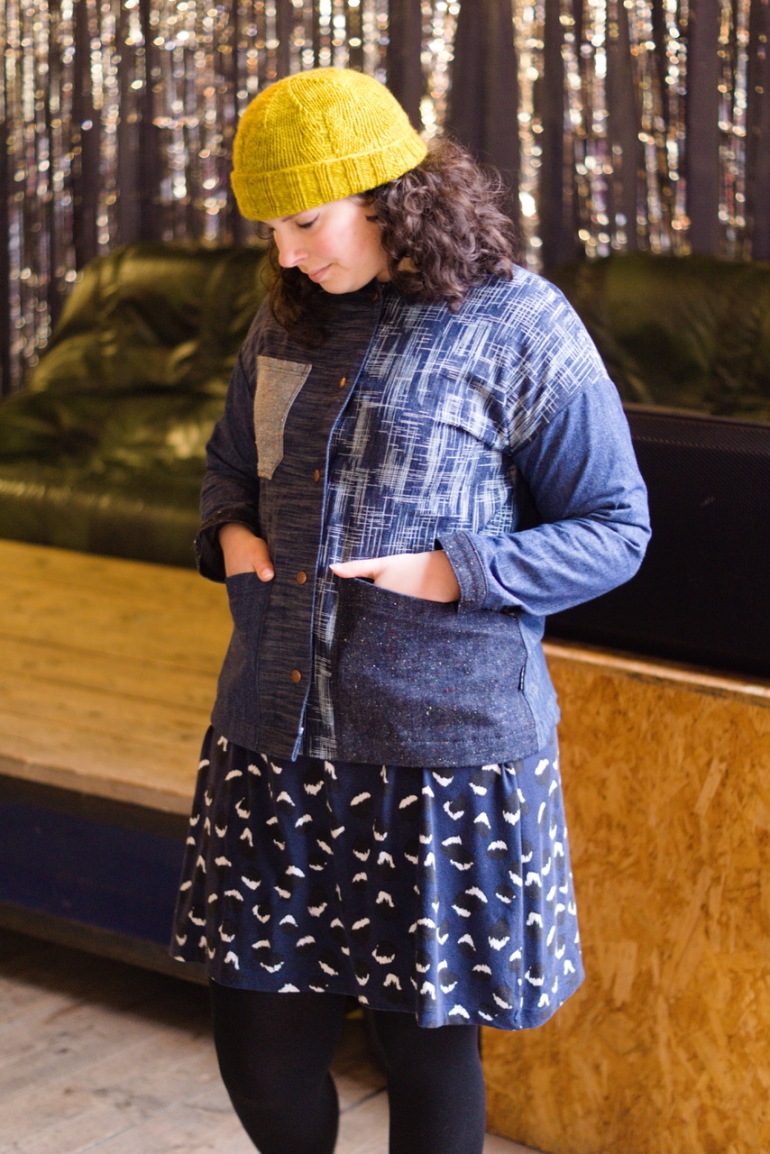 Because it is my favourite, it may come as no surprise that I have made quite a few denim garments over the years – a York Pinafore, a Pippi Pinafore, an Ellis Dress and a Camden Skirt immediately spring to mind. Because of this (and because I never throw fabric away) I had a small pile of denim scraps waiting to be used so I thought – why not use them together?!

The idea for this jacket came from that pile of scraps. I wanted to make a colour-blocked style garment that looked more cool and wearable than I-just-didn-have-enough-fabric-to-make-one-of-these. A challenge I was prepared to give a go, after all they were all scrap materials!

I went for the Ready to Sew Julien Chore Jacket pattern because I already had that pattern in my stash. Since that one was released there have been loads of similar jacket patterns that could be used to create this same look. I really love the chore jacket style and don’t have anything like it in my wardrobe.

My measurements are 37 in bust, 32 in waist and 47 in hip. I chose to make the size 40 around the bust and shoulders, graded out under the armscye to a size 46 at the hip. When I tried it on I couldn’t believe the fit. I don’t think I have EVER owned a button up jacket where I have actually been able to close the bottom button before!

The cutting out of this project was the really fun part, I spent a full evening moving pieces around and trying to decide which pieces would look good in which shade of denim. Of course, all the scraps were funny shapes so it wasn’t always possible to get many pieces out of each scrap. I wanted it to look mismatched but not totally crazy, I’m still not sure if I’ve managed to hit that sweet spot or not!

The only ‘hacking’ I had to do to make it work was to cut the back into two pieces. I thought when I chose this pattern that the back was already assembled from two pieces but in fact, the flap is constructed by folding a pleat into one back piece. I didn’t have a scrap big enough for that so I had to chop it into two pieces and add a seam allowance where the fold would be. It was really easy to do and I love the look of the back.

I am not sure how well this patchwork style would work in other fabrics but I think the denim lends itself to this mismatched workwear vibe. I even added extra shades of blue into the piece by playing around with the ‘right side’ and the ‘wrong side’ of the denim. The chest pocket is actually the reverse side of the same denim used in the left pocket, collar and cuffs.

The construction was relatively simple, I think it is supposed to make a good introduction into sewing outerwear. I didn’t love the collar construction, but that is my personal preference. I didn’t really find any disadvantages to working with lots of different denims, they are all of a similar weight and there really isn’t a downside to using up all those scraps! I even decided that in the spirit of the piece that I wouldn’t go out any buy any extra buttons or thread or anything for it either. I toyed with the idea of doing some contrast topstitching ( I love topstitching in yellow or rust when working with denim) but I decided that this design is ‘busy’ enough and if I wanted to avoid the clown look I was so wary of I would be better off sticking with a navy denim thread which I think was a good choice. 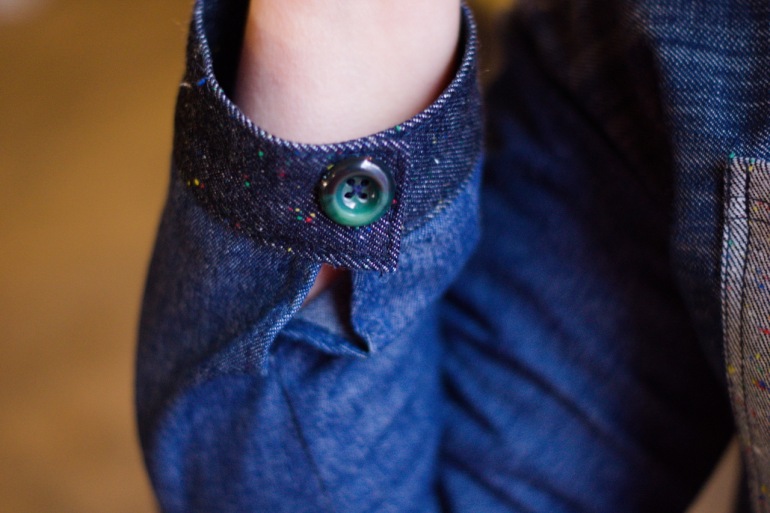 Not wanting to bother my very sensitive (read: difficult!) machine with trying to do buttonholes through thick, interfaced denim, I chose to add copper snaps down the front which I think look amazing! I only had five left in the pack which was enough for the front of the jacket but not enough for the cuffs as well. After much deliberation about whether to go out and buy another pack of snaps, I decided to add buttons to the cuffs instead and I found two of these green buttons which I think make a cute and quirky detail. The last detail I wanted to add to this make is a Kylie and the Machine ‘You can’t buy this’ label, because I don’t think I have ever made anything so unique before and I love it, so you definitely can’t buy this! 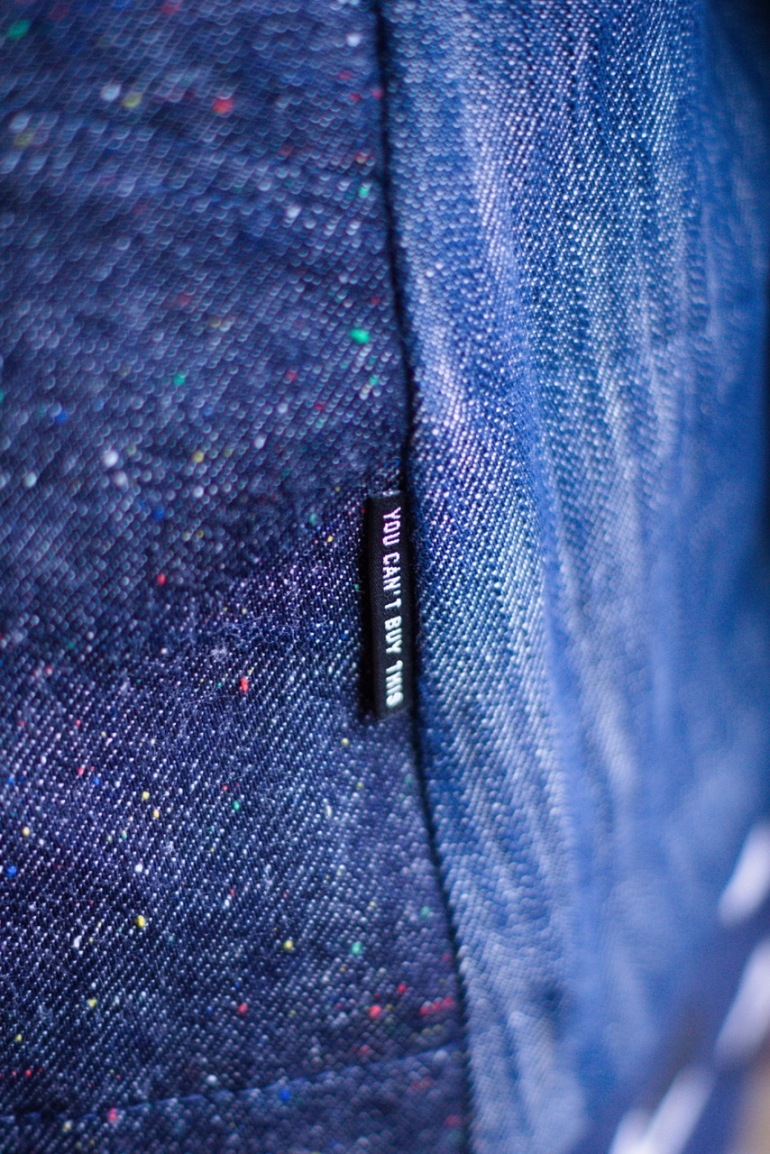 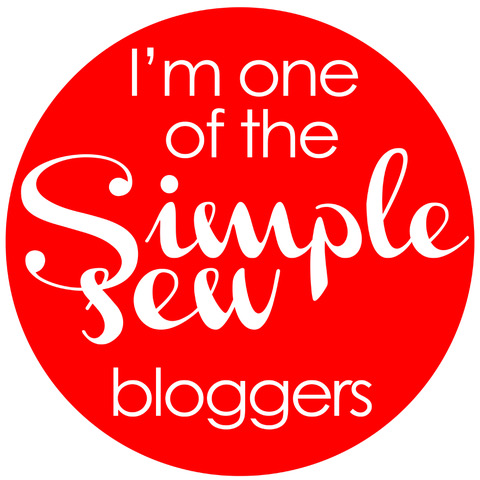