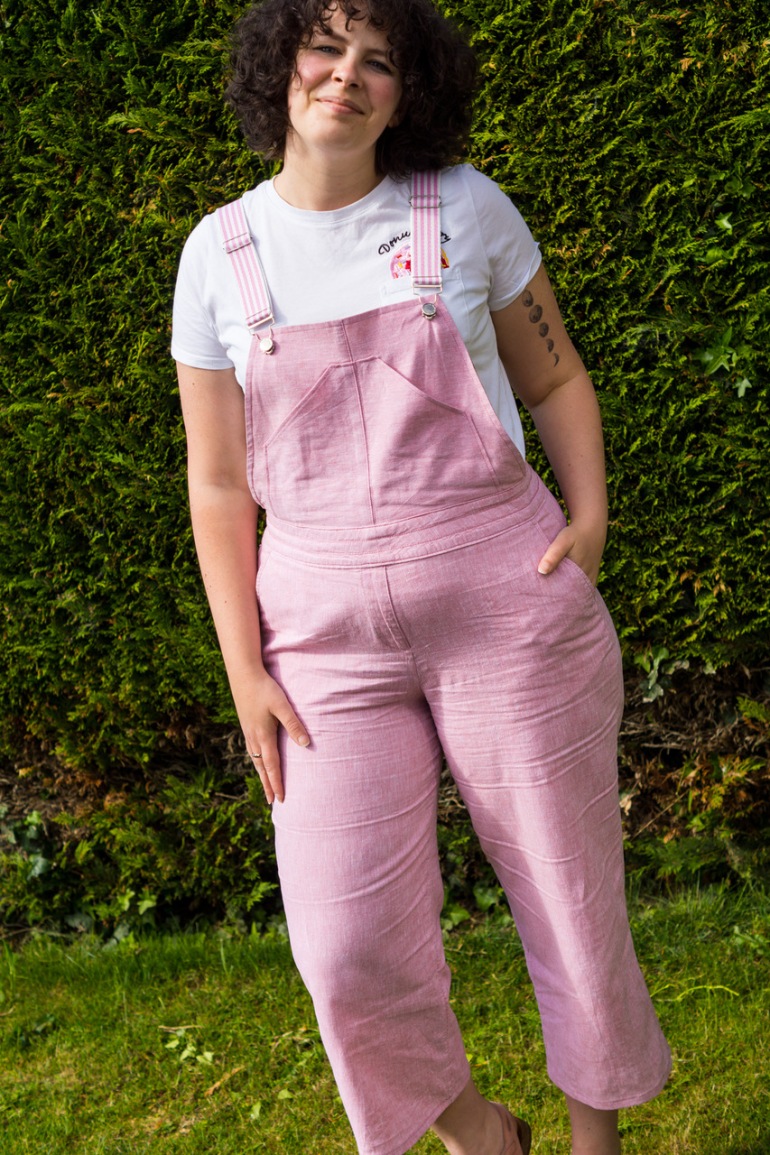 I bought a pair of pink linen trousers in a charity shop in January. That seems a lifetime ago right now but I can remember vividly standing in the shop trying to decide if this crazy idea to turn a pair of trousers into a pair of dungarees would work.

For a bit of context – I don’t wear a lot of pink (I think this might actually be my *first* pink garment), as I have a long standing hatred of the colour. But when I saw the pictures of the Closet Case Jenny Overalls when the pattern was first released I started to think that I would actually love a pair of pink linen dungarees.

Then I saw this amazing pair of pink burnside bibs that Marie made and it was love! So when I found these pink linen trousers, in my size, in a charity shop, for a mere £3.50, I couldn’t help but wonder if maybe, just maybe, it might be possible to refashion them into dungarees…

I took some before pictures and expressed my intention on Instagram in order to try and make myself accountable but ultimately if it all went wrong I think the linen is so pretty I would have definitely made a simple top with the fabric either way.

My first challenge was to move the opening. Because I would be stitching a bib onto the front waistband, I couldn’t have the zipper opening in the centre front – that needed to be moved to the side. Firstly, I took the waistband off by unpicking it carefully. I then unpicked the fly shield and the zipper and stitched the front fly closed.

Next, I opened up the side seam and inserted a longer invisible zip there. My zip insertion isn’t as concealed as I would like as the seam allowances had already been trimmed back to 0.6mm and so I had very little to work with, this was probably the trickiest part and is the only big imperfection of the whole refashion. It’s not terrible though and was definitely the best I could do. 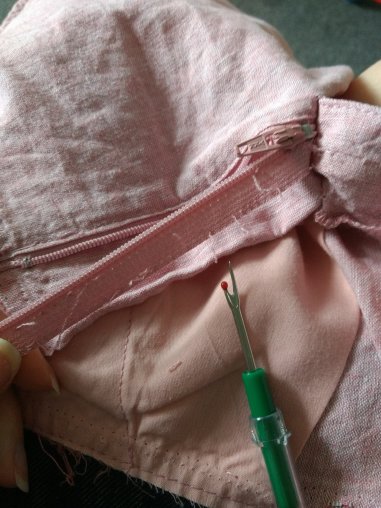 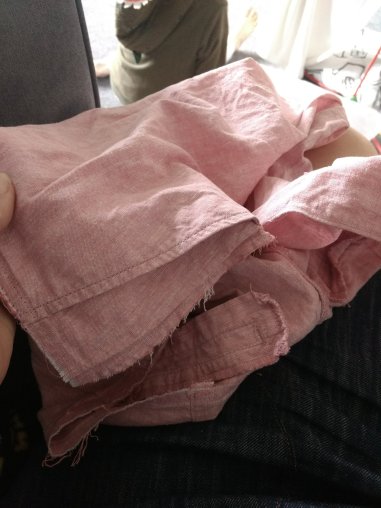 Next, I had to construct a bib. I used the Jenny Overalls pattern as it was my original inspiration. Firstly I had to unpick the hem, these trousers were originally sold as ‘long’ length and had been taken up by hand by another seamstress. So first I had to unpick the hand stitched hem and then I had the original machine-stitched hem to unpick too. This gave me around 4 extra inches of length. I washed and pressed the trousers at this point to try and close the previous stitching holes and get rid of the hem creases as much as possible.

I laid the bib pieces out against the grain in order to lose as little length as possible. Once I had cut them out of one leg, I shortened the other leg to the same length and used that piece of linen to cut out the pocket pieces. At this point I re-hemmed the trousers with as little seam allowance as possible (turned under 0.5cm and them another 1cm).

With my outer bib pieces cut, I decided to fully line them as the Jenny instructions advise if using lightweight fabric. I chose some ochre cotton sateen scraps from my scraps bag and I stitched the two linen fronts together and cut one lining piece out around that to reduce bulk in the middle. I then constructed the bib and pockets as written in the Jenny Overalls pattern instructions.

Once I had a bib constructed, I stitched the waistband back on the trousers with the opening at the right hand side. I chose to remove the two visible buttons from the waistband and use two of my own metal jeans buttons to match the buttons I was planning to use on the bib, I think this gives it a cohesive look and I have popped the two white buttons I removed, into my button stash for use another day.

The last job to do was to add in straps. I definitely couldn’t get linen straps out of what I cut off the bottom of the legs. And as I haven’t ever made anything pink before I don’t have any scraps I could use. I did think denim straps might look cute but as I recently used all my denim scraps to make this jacket, I didn’t have any denim pieces long enough. So I decided to buy some webbing to use as the straps. There are loads of different pink webbings out there but I thought the likelihood of getting a perfect match through a computer screen seemed nearly impossible so I decided to go for a deliberate contrast to avoid that *almost-matching-but-not-quite* weird look.

I chose to order 2m of this striped webbing from Textile Express and was the only new item I bought for this project. I am happy with this decision as I think these straps are the perfect finishing touch. I then just added buckles and buttons I already had in my stash and voila! Done!

Initially, I stitched the straps on meeting in the middle but after wearing them for a day (OF COURSE you have to wear a new make immediately right?!) I felt like the straps were falling off my shoulders and what I should have done was have them cross in the back. It was a ten minute job to unpick the back waistband and cross the straps and stitch it back up. I am so glad I did, after all the effort of the refashioning it would be such a shame if I didn’t wear them for such a silly reason.

Phew! If you stuck with me through all that then well done! This wasn’t a project that I completed in one evening, I sat and did some unpicking here and there whenever I got chance over the course of a few weeks.

I would also like to add that despite these being originally from a supermarket brand (Tu from Sainsburys) they were really well constructed and I was amazed at how much work had gone into them by garment workers who cannot have been paid much to produce a pair of trousers for a supermarket to sell cheaply. Refashioning is an amazing reminder of where our clothes come from and the other hands that have worked on our clothes before us. This is my entry for this years #restylingathome challenge organised by Amy Nicole Studio and Pilar Bear, thank you for organising such a thought provoking challenge!

5 thoughts on “How to Refashion Trousers into Dungarees”